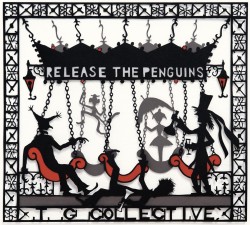 Our first album as TG Collective – Release The Penguins – is released in the UK today.  Hurrah!  It seems quite a while since we released ‘Who Ate All The Tapas?’ as Trio Gitano back in 2005, so we’re a pretty chirpy bunch of penguins to get a new album out after a year or two gap!

We recorded in an old milking barn in Shropshire last year, recording and co-producing with our very splendid engineers Alex Merola (bearing an uncanny resemblance to the Milk Tray Man) and Joe Peet.  We’re also very proud of the paper-cutting artwork designed for us by the brilliant artist Suzy Taylor. We’ll have a blog up online soon with lots of photos from the studio, Suzy’s paper-cuttings and a few scribblings on how we went about recording the album.

If you get the urge to invest in some penguins online, you can listen/click along to ..

… and most other major retailers, online stores and download sites.  You can also help to support your local record store and order from them directly if they don’t have it in stock.

If you want to order directly from us, pop along to our Emporium.

Also, big thanks to Peter Quinn at Jazzwise magazine who has given us a very nice first review in the new June edition …

“This follow-up to their 2005 album ‘Who Ate All The Tapas?’ sees the original Trio Gitano expanding into a collective that incorporates flute, fiddle, double bass, trumpet and percussion.  Based around the two guitars of Jamie Fekete and Sam Slater (the other original band member, Sophie Johnson, left in 2006 to follow other musical pursuits), the broader textural palette makes for a very tasty gumbo indeed.  A fairly eclectic outfit from the start, TGC’s ever-widening crazy quilt of influences references flamenco in ‘Silhouette’ and ‘Escape from Girona’, jazz in a delightful two-part take on Horace Silver’s ‘Song For My Father’, a two-guitar ‘Homage’ to JS Bach’s magisterial ‘Chaconne in D Minor’, and a nod to Django Reinhardt in the album’s swinging title track and ‘The Sheik of Araby’.  The group’s mentor, Bryan Lester, is still very much in the frame, contributing three pieces the pick of which is undoubtedly the unerringly lyrical ‘Sutta’.”

We had a lovely sell-out launch gig at the ever-unpredictable Polish Club in Birmingham on Friday – big thanks to everyone who came and invested in penguins! We’ll be back in July at the Manchester Jazz Festival and Cambridge Big Weekend. More news soon!

Thanks for your support …

ps .. join us on Facebook and win a signed album this week!