The first in one of several blogs about the making of our new album.

Over the past few months, apart from the noise that we’ve made you sit through on the album itself, there’s been a lot of interest in our album cover – designed by the brilliant London based paper-cutting artist Suzy Taylor – so we thought we’d show you how the final cover art of Release The Penguins came to fruition.

Initially, we were pondering quite how to go about designing an album cover … should we try and plagiarise Sgt Pepper or Dark Side of the Moon, or get our nice cheesy chops and some tight fitting jeans on the front to scare away any undecided investors? 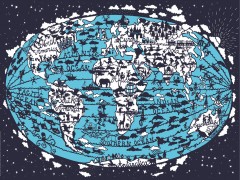 After another day sat staring blankly at his walls, Jamie came up with the idea of basing the cover around an intricate papercut, realising he’d been staring at a print perched high in his dwellings from the Famille Summerbelle for the past six months that stirred something in that curiously cryptic brain of his.

For once it made good sense too – a lot of our music (without trying to sound up our own backsides) can be quite intricate and detailed, with a lot of different layers and textures, so this form of artwork reflected it all quite well.

After much hunting around on the interwebs, and deciding that the rather famous Rob Ryan’s umpteen-year waiting list might see us hit our sixties and bankruptcy before the album would be released, we were lucky enough to stumble upon all sorts of splendid curios in Suzy’s Etsy shop.

A few emails later, we found ourselves getting suitably lost around north London, finally ending up in Suzy’s back garden in Finchley on a sunny June afternoon in 2011.  After confusing poor Suzy towards migraine-territory, and checking out some of the amazing work in Rob Ryan’s book, we loosely settled on asking her to create something dark, weird, wonderful, crafty, a bit Tim Burton-ey, not too pretty, and possibly being based around a sinister looking carousel.  Along with the added and undecided elephant in the room of whether or not to include any penguins.  And colour.

No pressure there then.

Here’s a couple of the early sketches from Suzy … 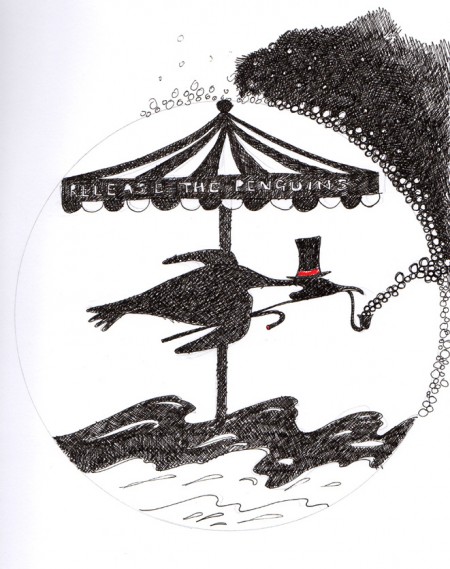 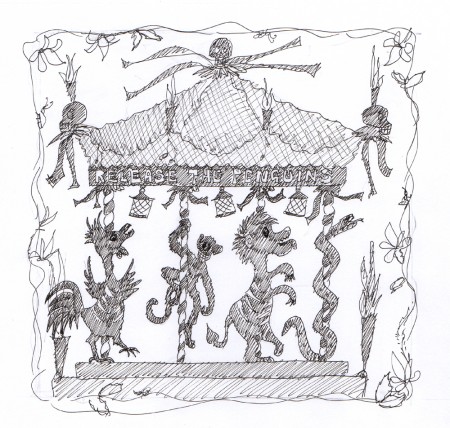 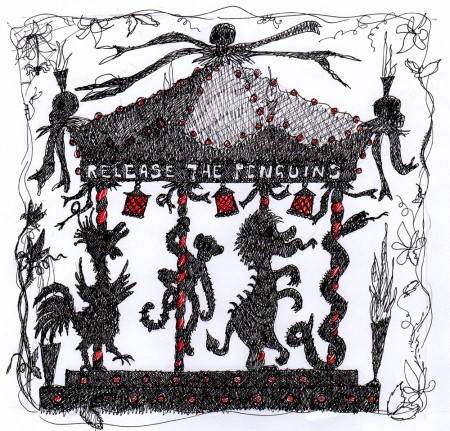 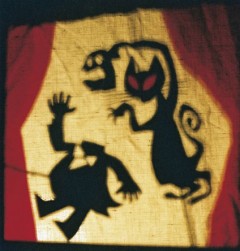 A bit further down the line, another Jamie-find was the cover artwork from Mikhail Bulgakov’s novel, The Master and the Margarita, which was suitably demonic to go some way toward reflecting the music of some flamenco gypsy jazz classical misfits from Birmingham, clearly.

So onwards Suzy sketched away, with plenty more confusing requests arriving from TGC HQ, along with the added excitement of moving house and having a car crash to add to her to-do list. By the time we were nearing the end of mixing the musical side of things in early 2012, we were into the final flurry of sketches and drawings for the front cover … 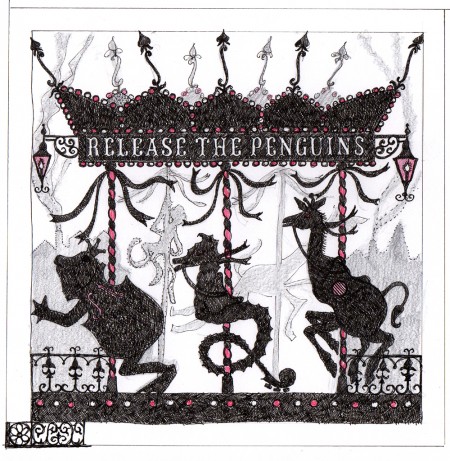 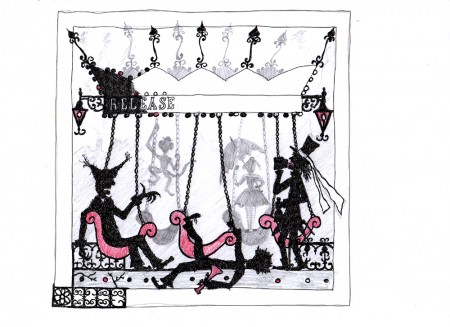 Once we’d decided on a final cover, all that was left was the simple task of cutting it out of paper. These photos of the finished cutting (some of our favourites) from Suzy show just how talented she is … 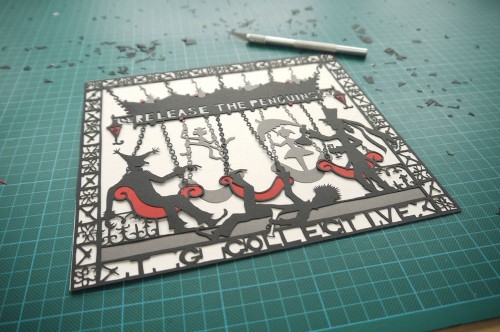 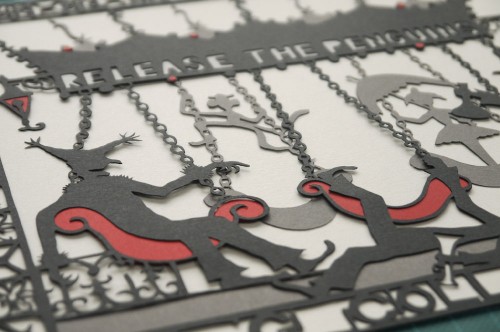 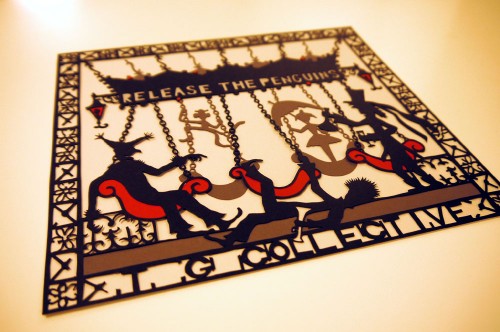 Not letting her off lightly were a mere front cover to her name, we made sure she earned a few more blisters with the back cover as well … 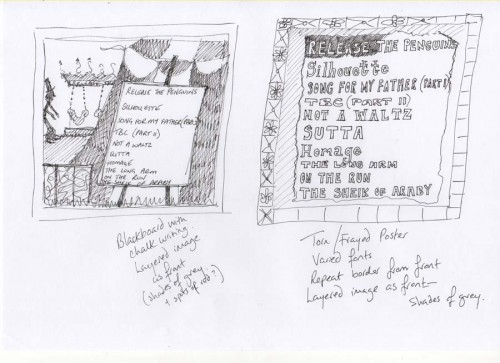 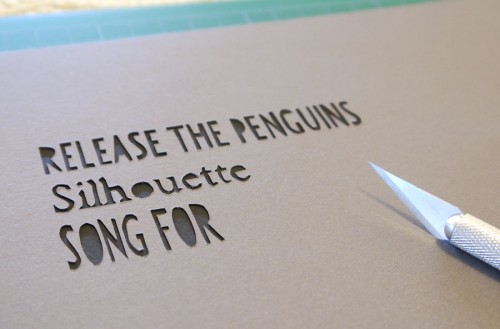 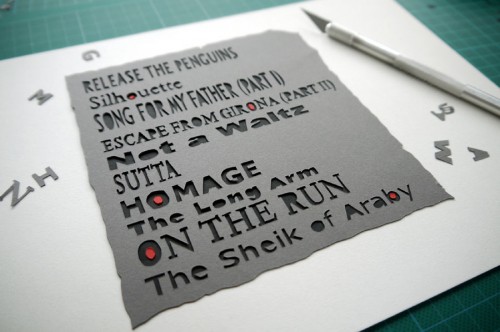 We called upon the equally awesome photographic services of the lovely Kate Beatty to take shots of the cover from the perfect vertical angle so we could drop it nicely onto the front of CD digipak case, but with enough light and shadow so that it still looked like a paper-cut. Another easy job with a 12cm piece of paper.

Some nifty photoshop cutting, aligning and colouring later, and there you have it.  Or as Sara, our ever-splendid press and promotion guru put it, ‘not sure what you briefed, but drunken falling over weird musicians sounds about right.’ 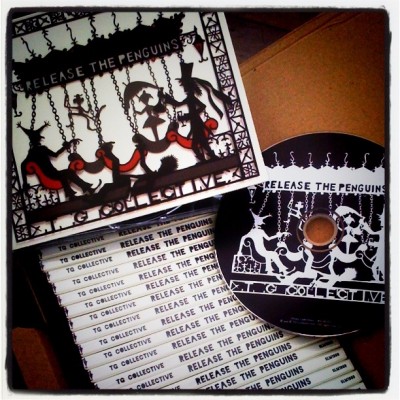 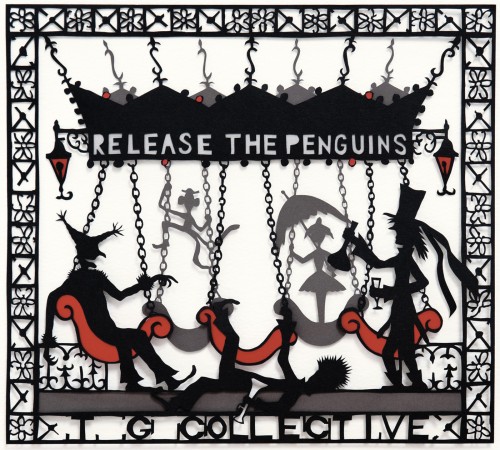 If you get the urge, you can have a listen and even invest in a copy of the album here!

Our next blog will bring all the gory details and photos from our recording sessions in London and a former cow shed in deepest darkest Shropshire. Along with Stuart Hall’s report from the band vs engineers football match.