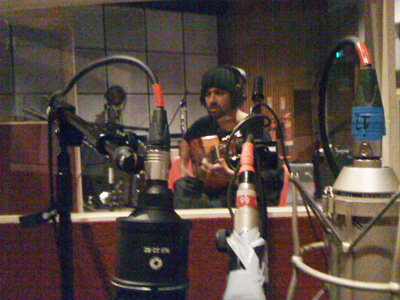 It’s been a little while since we last ventured into the business of making records, so as the worldwide demand for CDs hits an all-time low, we thought it would be a splendid idea to record another one.

We began recording a few weeks ago in the excellent live room at the old Grosvenor Studios, in Handsworth, Birmingham (now ‘CMAT‘), where, most importantly for our studio-selection process, the theme to Gerry Anderson’s Thunderbirds was recorded. Apart from the side issue of recording, we managed to lock Tom in a sound booth for several hours, before Percy took an afternoon nap inside his bass case.

We have a few more sessions planned in the wilds of Worcestershire, and with an occasional afternoon of overdubbing in Ana Garcia’s kitchen thrown in for good measure, we’ll have the finished album landing by the end of March 2011, with a UK release tour kicking off later in the spring.

We’re co-producing the album alongside our engineers Alex Merola and Joe Peet, who are clearly only doing it to experience the delightful service offered by Virgin Trains to ferry them from London to the tranquil surrounds of Birmingham New Street station several times a week.  In the middle of the night.

Thanks for the many emails and enquiries about the album … we’ll keep you posted with our progress, release dates and availability, and pop a few tracks up online in the next couple of months.  Photos of Louis asleep at the microphone after his 47th take will also no doubt find their way onto our Twitter and Facebook pages.

In the meantime, here’s a short video of Percy having a little moment down in Devon last year …